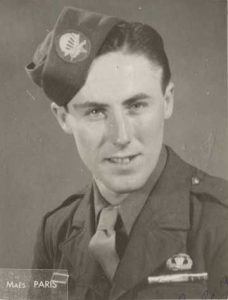 Is our founding Easy 508 Sponsor Veteran and is responsible for our unit’s creation. While the 1SG was standing amongst the crowd at the Reading Air Show in 2000, a tall, distinguished gentleman came up to him and asked if he had seen any airborne paratroopers around. The 1SG, decked out in a M42 uniform, respectfully replied, “you’re looking at one,” and Jim quickly responded, “so are you.” With that chance meeting, Easy 508 was born (Prior to that meeting, our unit was a small Company in the 505PIR). Subsequent to meeting Jim, the original stick of Pathfinders met his family, and then Jim introduced us to George Shenkle (our second Easy 508 Sponsor Veteran). Shortly afterwards, a vote by those Pathfinders was held and Easy 508 was official created with the mission to continue on the legacy of E Company of the 82nd Airborne, 508th Parachute Infantry Regiment.